Vuosaari, the most eastern corner of Helsinki, is a beautiful suburb and has in my opinion a fair amount to offer for families, even though the movie Vuosaari (2011) apparently shows the suburb from quite a different point of view. It is easily reached by metro (subway) in 25 minutes from the city centre for a bit of a day trip. A walk to the main beach in Aurinkolahti will take 15 minutes (there are buses too, I’ve just never used them) and one of the things I like about the area is that you can walk to the most places through parks or very wide pedestrian lanes. (Usually streets are cleaned pretty quickly but after a snow storm a beach parade may not be the first one to be cleaned… far right) 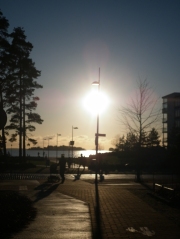 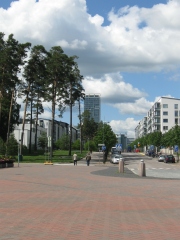 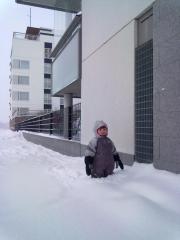 Before heading to the beach there is the centre of Vuosaari at the end of the metro line. Vuosaari has all the basic services but there is also Vuotalo, a culture house that hosts a number of events such as seminars, theatre plays, stand up comedy etc. in various languages and for all ages. The events mostly cost a few euros but not much, some are free. We’ve been there e.g. to a kids puppet theatre show offered by Hungarian travellers and to pat sheep. In the same house is the library and a bar and cafe with a play corner (but unfortunately filthy toys), high chairs and a fair selection of foreign beers. In one of the rooms behind the cafe they show kids movies now and then. They are free for everyone to go to without any prior contact. 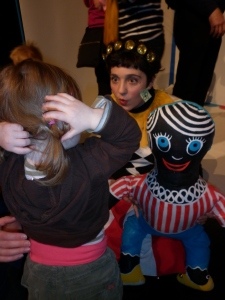 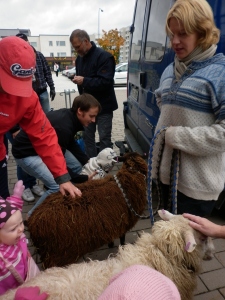 There are several playgrounds with indoor activities too. At least Mustakivi and Lohikäärme has good facilities. The Mustakivi playground is almost on the way to the main beach. In the summertime it has a paddle pool and hosts a free children’s flee market every second Friday. Everyone can come and sell without prior commitment. They also have a bbq on most Fridays, just take your own snags along. Next to Mustakivi is a park, with good slopes for kids tobogganing in the wintertime. Close by is also kids flee market Piilo, where you can rent a table and leave kids equipment to be sold. They have a descent play area there, which is already a good reason to stop by if the weather sucks 😉

If you walk a bit past the beach and past the little harbour towards Uutela outdoor area, there is the more affordable cafe Kahvila Kampela, that among others serves a delicious salmon soup for lunch. Kampela is open during the weekends at least partly in the winter time too (there are heaters), and is welcoming e.g. dog walkers too to their big outdoor catering area. Uutela outdoor area starts behind Kahvila Kampela, has a couple of good fire places every one can use (you may have to bring the wood, they are used a lot) and nice walking tracks. Last I was there the famous and huge tin cows by Miina Äkkijyrkkä were still there, but I rarely get that far…

You’ll find lovely small jetties, more beaches and walking paths also heading from the main beach towards Kallahti. There is another little cafe close to Kallahti beach, which I also warmly recommend. The service is not always what it should be but the prices are, and as it is a place where young people can learn working skills, I think one can overlook some slowness in the service. It has pretty poor open hours though (something like 9am till 3pm on weekdays). Running towards Kallahti peninsula on a narrow ridge, where you can see and *smell* the Baltic see on both sides, and plants are similar to what you’ll see in the archipelago, well, that is the place I’ve most enjoyed my jogging in Helsinki. Too bad Vuosaari is so far from where we now live, too much of a hassle to go there for a run regularly. 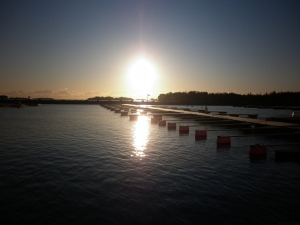 Nature Knows No Such Barriers