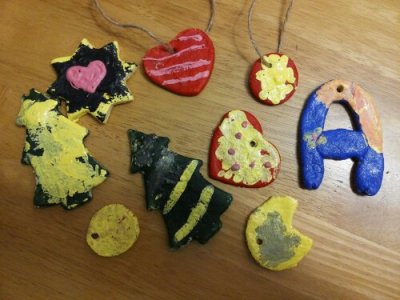 We made Christmas decorations just like Easycraftsforchildren suggested. My 2 and 3 yo kids had loads of fun mixing the dough, cutting shapes with biscuit cutters and painting the decorations. The 2 yo tried to eat the dough but the taste taught him quick enough not to eat it… the decorative part became more a repainting part but that is their artistic view on the design so that’s ok.

The one thing we found really handy was to add a bit of oil in the dough and before you do anything with the dough, to put a bit of oil in your hands and on the rolling pin too. Sounds messy, but it actually made it less messy, even with the toddlers.

We have (only a few left, the best ones completely made by toddlers are gone) and will give these along with Christmas cards, when visiting friends etc. Our kids have been very proud to give something they’ve made!

Which reminds me of our earlier Christmas calendar dilemma. We have now solved it so that our kids got one traditional picture one each, and one common one with mainly tasks. The tasks have been helping out in something we’d do anyway, wrap a present to somebody we’ll meet later on the day, call a family member (thanks Kate!) etc.

Funny though, one day was so busy that I just put chocolate coins in the advent calendar for my kids to find. Obviously they liked them, but they were also super disappointed not to have a task for the day! They just couldn’t believe there was nothing for them to do. Which I suppose proves Jesper Juul right: he claims toddlers just love to help their parents. So tasks it will be, every day until Christmas (together with some lollies some days)!

P.S. In my opinion the best part with the calendars has been getting going: our kids can open them only after getting dressed, washing their faces and brushing their teeth. Works like a charm on a daycare morning! The best Christmas pressie I can think of!