Not playing with food but using processed colourful fluffy potato, hold on, no, corn! (I’m sure I was told they are made of potato but when reading more about these online turns out the bits are made of corn. Biodegradable anyway). It was not quite free, not even cheap but also not expensive. We tried these last summer on a kids festival, I liked them, and as I’ve mentioned before, I like to give time as a part of my present to my kids. This was a Christmas present to our kids aiming for us to have something fun to do together.

These potato bits are very simple to use: just make a cloth moist, tip the end of the potato bit on the cloth and join the pieces together. Be creative. 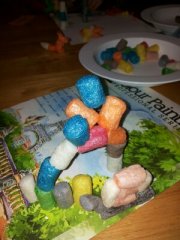 Older kids can easily do less abstract creations using scissors, I did my best with the bird and fox below. If the once joined edges are cut off, the pieces can also be reused. The brand of the potato we used was PlayMais. I have no idea if others manufacture these as well. Oh, this was not a paid ad, just a way of spending some time in the chicken pox quarantine. 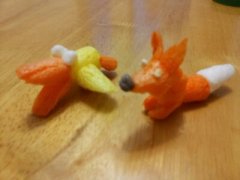 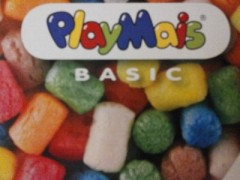 Apparently PlayMais is now a part of our chicken pox routine, as my 3 yo daughter told me we need to get the corn our again when she got the disease.

She even had an excellent idea of what to make together: a tree with autumn leave on the ground, she did the trunk and cut and “glued” the leaves herself. At her request I added a few animals to the scene. The train we did together but I was mainly following her directions. I thought her elephant in the back (it wasn’t allowed in the front because they don’t really live in Finland) was brilliant too with the ears and the trunk!

Nature Knows No Such Barriers